You found our article on the history of team building.

Team building history is the origin story of the practice of mindful teamwork and team development. This narrative starts in the early 1900’s, when experts first started speculating that human connection might have ties to productivity, and began observing and experimenting. This history continues into modern times, where team building is a common practice that a majority of companies use. This concept is also known as “team building background.”

This article covers the:

Now let’s travel back 100 years to learn about the roots of teamwork. 🙂

Though humans have cooperated and collaborated since before the early days of civilization, the concept of team building first emerged in America around the 1920s and 1930s.

During this era, studying and applying psychology began to gain traction in the business world. Around this time period, Edward Bernays pioneered the public relations industry on the principle that understanding and tweaking human thought and emotion could convince consumers to buy products.

Meanwhile, researchers decided to apply the concept of behavioral psychology to workers, not just customers, to improve business bottom lines. A scientist named Elton Mayo conducted an experiment called the Hawthorne Studies, which began in the late 1920s aimed to increase worker productivity.

Mayo collaborated on the study with his graduate assistant Fritz J. Roethlisberger, and the head of the Department of Employee Relations at Western Electric, William J. Dickson. The researchers observed workers at the Hawthorne Works in Chicago, Illinois, and presented different situations to discover which conditions were optimal for performance.

During the early stages of the experiment, scientists tampered with the physical environment by changing lighting and humidity conditions. Later, researchers expanded the study to observe social and emotional atmospheric factors such as  interactions with leadership and colleagues.

The study concluded that the relationships between coworkers could affect productivity. Specifically, becoming part of a team, gaining the support of teammates, and feeling a sense of responsibility to colleagues motivated positive changes in employee performance. Following many of the experiments, the subjects maintained the relationships and remained friends. Worker satisfaction rose drastically. The experiments revolutionized industry and brought teamwork to the forefront of business titans’ minds. The Hawthorne studies effectively launched a century of team building efforts.

Another result of the experiments was a phenomenon dubbed the “Hawthorne Effect,” the discovery that subjects in a study alter behavior based on the knowledge that they are under observation. Participants in the study improved productivity, in part, because managers took an interest and expressed concern for the employees’ work and demonstrated a willingness to change the system to the benefit of worker wellbeing. This concept would influence managerial attitudes and incentive programs for decades to come.

In the earliest form, Total Quality Control stated that it was the responsibility of every member of the organization to ensure the production of quality products and services. This idea hinged upon the condition that each employee of the company felt like a valued and integral member of the team.

Teamwork got a boost from the patriotic spirit of the WW2 era, boosted by slogans like “We Can Do It!” and wartime activities like the victory garden. The prevailing sentiment of the period was that every citizen needed to contribute for the US to achieve victory. For instance, women pitched in by filling vacancies in the factories, which encouraged women to enter the workforce in mass numbers. That spirit of teamwork continued upon the return of the soldiers and the following post-war industry boom. 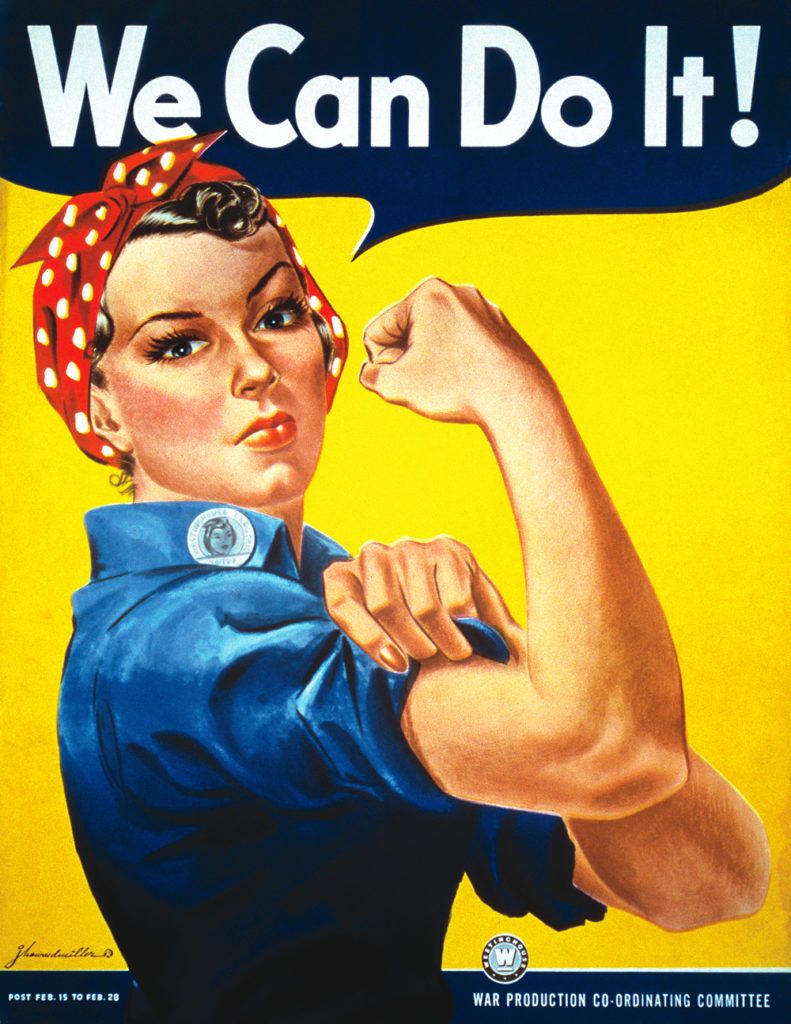 Arguably, the military’s emphasis on brotherhood and cooperation greatly influenced the culture of team building in the coming decades. For example, many business strategists modeled team building tactics on military ideals. Beginning in the 1950s the military backed and collaborated on team studies with civilians. Many of these findings would provide a basis for team building best practices of the future.

During the 60s and 70s, industrialists began heavily implementing theories discovered in the previous decades.

Notably, the sixties saw a rise in T-groups, also referred to as training groups or sensitivity training groups. T-groups  focus on human emotions and experience. These group meetings sought to strengthen group connections and ease conflict by allowing participants to express and examine emotional responses provoked by teammates’ actions. T-groups helped to eliminate negative group dynamics and promote positive interactions by giving employees an avenue to air concerns and allowing the group to work together towards a solution.

As the US entered a recession in the late 1970s and competed with Japan for industry efficiency, the business world revisited the concept of Total Quality Management, or TQM. Around this time, this management style gained traction and grew popular. One of the facets of TQM is total employee commitment, which means that every employee should actively try to reach company goals. In order for this outcome to happen, leaders must provide the proper training, acknowledge the value of individual contributions, clarify roles, and build an environment where employees feel safe sharing opinions and taking risks. We can see echoes of company culture building strategies in the workplace today.

As corporate culture expanded in the 1980s, so did the culture of teamwork. The lessons of the past half-century drew attention to the benefits of team building and sparked a growing trend of team building initiatives. Company culture and organizational structure dominated the minds of industry leaders in the 80s. Implementation of mindful team building theories began in the 60s and 70s, but gained even more momentum during business-centric Reagan years. This decade also saw employees venturing out of the office to perform physical activities such as rafting, camping, and adventure courses.

The 1990s saw the birth of the team building industry, as some of the first event companies emerged to facilitate team bonding activities for organizations. As the world wide web launched, companies began keying in more closely to each other’s internal operations and adopting similar cultures and attitudes towards teamwork. This era saw a shift towards personality-based team building, especially towards personality tests like the Myers Briggs Type Indicator.

Experts published many notable team building studies during these final years of the 20th century, and valuable research continued to emerge in the following decades.

As electronic publishing gradually dominated the media, business leaders transitioned into thought leaders and increasingly broadcast tips and best practices via blogs and online publications. Search the web and you will find no shortage of post-millennium articles about team building, the bulk of which published after 2010. The past twenty years or so really cemented team building as widely-accepted and essential business practice. You would be hard-pressed to find a company that did not practice team bonding in some form or another, from an elaborate team building retreat to a simple team dinner.

One of the biggest factors in team building’s wide scale acceptance circa the 2000s is the adoption of assertive team building tactics by technology companies. After reports revealed that Google had a years-long waiting list of interview candidates and ranked consistently as one of the best places to work, largely owing to the company’s outstanding culture, other companies scrambled to recreate that same magic.

Silicon Valley proved to be a leader in the realm of team culture throughout the early 2000s, as leaders in other industry sectors eagerly adopted tech-company-originating team activities such as hackathons, book clubs, and extravagant outings.

The future of team building

The global pandemic of 2020 ushered an immediate shift to remote work that inspired many companies to continue virtual operations indefinitely. In the coming years, remote team building will undoubtedly grow as more companies switch to online operations.

We’ve compiled a variety of virtual team building resources. Check out a few below:

Team building has a fascinating history, but an even more exciting future. By understanding the origins of team building you can more easily comprehend team building’s importance and guess tomorrow’s trends.

Next, check out this guide to creating work friendships with colleagues, and the psychology of team building.

We also have a list of company culture building activities to try.