Habits books are self-help guides that show readers how to instill healthy and productive behaviors. These works cover topics such as beating procrastination, forming routines, and maximizing time. The purpose of these guides is to help readers become more consistently productive.

These works are similar to books on focus, career books, training books, and CEO books.

Here is a list of new and bestselling books on habits to increase productivity, reduce stress, and master the art of balance. 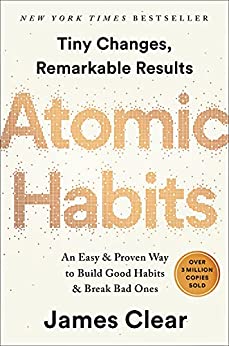 Atomic Habits is one of the best habit changing books. The book insists that faulty systems are often to blame for a failure to break bad habits and make good habits. The guide explains that the surest way to change behavior for the better is to manipulate your environment to make bad habits hard and good habits frictionless. Another key to long term behavior change is to introduce new habits slowly and in small increments, and to allow tiny actions to add up to progress over time instead of setting too-large and unachievable goals when starting out. James Clear applies simplified principles of neuroscience and psychology to his system and lays out clear strategies for reprogramming routines. Atomic Habits is the ultimate playbook for making lasting change.

Notable Quote: “Every action you take is a vote for the type of person you wish to become. No single instance will transform your beliefs, but as the votes build up, so does the evidence of your new identity.”

2. The Power of Habit: Why We Do What We Do in Life and Business by Charles Duhigg 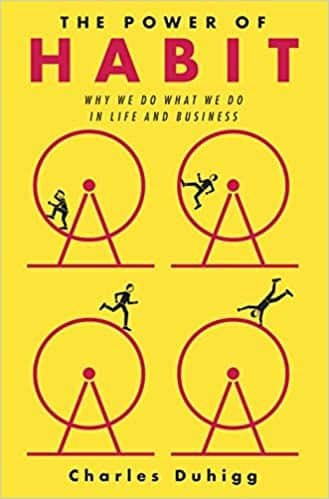 The Power of Habit applies a scientific lens to the concept of habit. Relying on research and case studies, NY Times reporter Charles Duhigg breaks down the purpose of habits as well as best practices for changing behavioral patterns. The book consists of three parts and analyzes the habits of individuals, successful organizations, and societies. As the title suggests, the book shows the ways that habit can have a powerful impact on action, and outlines the conditions that influence the formation of these routines. While most habit books lay out step-by-step instructions for changing personal behavior, The Power of Habit takes a more nuanced approach. Instead of giving direct advice, the book shares observations and analysis that help readers gain a better understanding of habit to use as a foundation for change.

Notable Quote: “The Golden Rule of Habit Change: You can’t extinguish a bad habit, you can only change it.”

Read The Power of Habit.

3. Tiny Habits: The Small Changes That Change Everything by PhD BJ Fogg 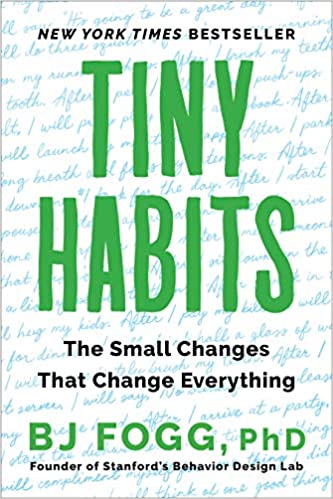 Tiny Habits is an instruction manual for making big changes in small steps. Stanford habit expert BJ Fogg draws on two decades of research and coaching to share proven methods for making lasting change. Fogg presents a system that tackles behavior shifts in increments. Tiny habits involve less risk and allow practitioners to ease into new lifestyles, however these small adjustments can add up over time and turn into big results. Tiny Habits simplifies the science behind behavior into easy-to-understand equations and figures, and offers exercises that help readers act on and practice the theories.

Notable Quote: “In order to design successful habits and change your behaviors, you should do three things. Stop judging yourself. Take your aspirations and break them down into tiny behaviors. Embrace mistakes as discoveries and use them to move forward.”

4. The 7 Habits of Highly Effective People by Stephen R Covey 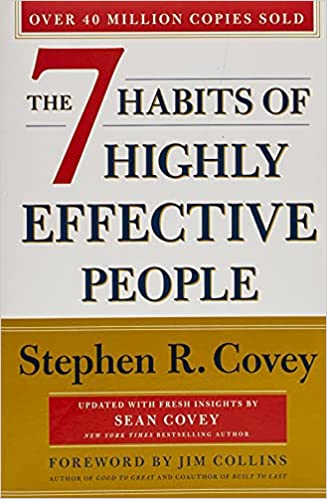 The 7 Habits of Highly Effective People is one of the most popular books on habits. Stephen R Covey identifies patterns of behavior that differentiate high achievers from the general population. These successful individuals make habits of seven similar behaviors, such as proactivity and goal-setting. The chapters explore each of the seven habits in depth with examples and tips about incorporating these behaviors into your own life. The 7 Habits of Highly Effective People is a reflection not only on how to form habits, but how to form habits most likely to result in success.

Notable Quote: “To change ourselves effectively, we first had to change our perceptions.”

5. How to Change: The Science of Getting from Where You Are to Where You Want to Be by Katy Milkman 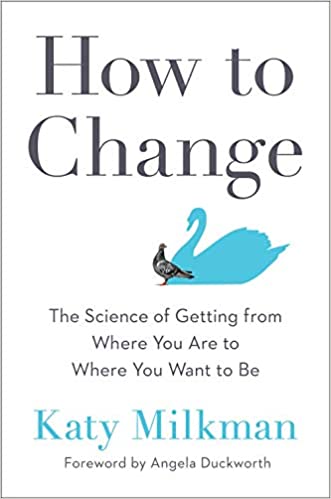 How to Change is a deep dive into transformation. The book explores the optimal conditions for change as well as the barriers that prevent people from making shifts. The author mines the results of real-world studies to suggest data-backed tactics for battling procrastination and laziness, rejecting conformity, and introducing healthier routines that help readers reach their goals. Along the way, Katy Milkman makes several references to the concept of habits, yet never strays too far from her wider focus of behavioral change. The book demystifies the idea of change by measuring the process and pointing out patterns. How to Change is a self-help guide that backs its motivation mantras and transformative promises up with hard evidence.

Notable Quote: “We’re more likely to pursue change on dates that feel like new beginnings because these moments help us overcome a common obstacle to goal initiation: the sense that we’ve failed before and will, thus, fail again.”

Read How to Change.

6. Elastic Habits: How to Create Smarter Habits That Adapt to Your Day by Stephen Guise 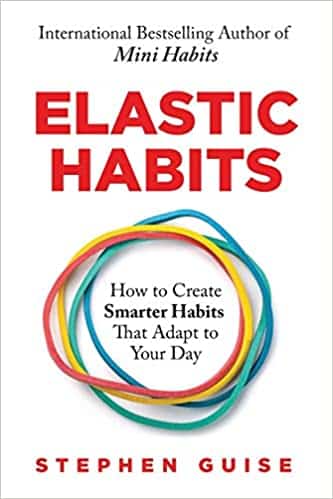 Elastic Habits is one of the most interesting habit development books. The guiding philosophy in this book is that flexible habits that allow for some leeway tend to be more successful than rigid rules. Many folks adopt all-or-nothing approaches, and when these strict schedules prove impossible or impossible in real life, practitioners tend to abandon goals altogether instead of amending the plan to suit the situation. Elastic habits allow folks to adapt to circumstances– for example, cutting workouts down from forty-five minutes to fifteen minutes on a time crunch day instead of skipping the exercise or forcing the workout and adding to the day’s exhaustion. Stephen Guise explains that following strict rules takes extra energy that could be put to better use. The book explains the difference between static and elastic habits and lays out ways that readers can set more bendable goals that better fit the demands of life. 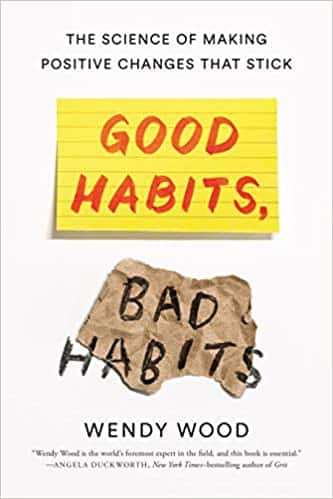 Good Habits, Bad Habits looks into the deeper psychology behind behavior change. The book analyzes anecdotes and provides scientific explanations as to why these attempts were successful or unsuccessful. The book breaks down habit formation into basic elements of context, repetition, and shows how behavior change is dependent on a combination of careful design and resilience. By explaining the science behind self-improvement, Good Habits, Bad Habits fills in the gaps other habit books leave between adopting a positive mindset and and achieving results. Though Wendy Wood peppers the prose with research and scientific principles, the writing remains entertaining and the tone never gets too dry.

Notable Quote: “Self-control is simple when you understand that it involves putting yourself in the right situations to develop the right habits.”

8. Better Than Before: What I Learned About Making and Breaking Habits–to Sleep More, Quit Sugar, Procrastinate Less, and Generally Build a Happier Life by Gretchen Rubin 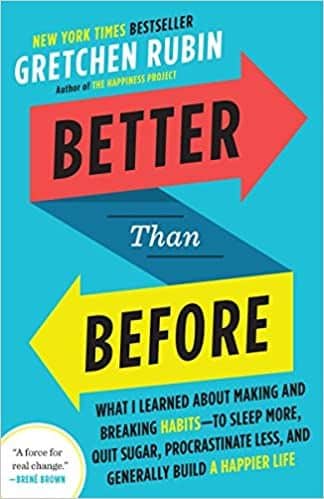 Better Than Before is one of the most useful healthy habit books. Gretchen Rubin is a thought leader who writes extensively about happiness and fulfillment. In this book, she explores how healthier habits can lead to greater contentment.  As the title suggests, the book explores ways to make positive lifestyle changes. The book opens by advocating for self awareness, and explaining that before you change yourself, you must know yourself. Rubin goes on to break down basics of the habit-forming process such as monitoring, scheduling, rewarding progress, and avoiding temptation. Better Than Before is a nonjudgmental, step by step guide to becoming an updated version of yourself.

Notable Quote: “The desire to start something at the “right” time is usually just a justification for delay. In almost every case, the best time to start is now.”

Read Better Than Before. 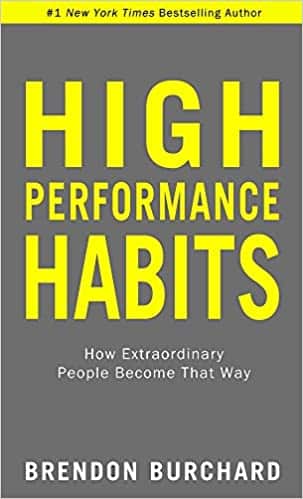 High Performance Habits is a study of sustained success. Brendon Burchard sets out to solve the mystery of what sparks ambition, how some teams achieve faster and more-lasting results, and why some folks are happier than others in striving for success. According to the author, six habits make up the blueprint to high achievement and satisfaction:

Chapters explore each habit in depth, provide illustrations of leaders who exhibit these qualities, and advise readers on how to develop these traits. The book also outlines pitfalls to avoid, and shows how to maintain these attitudes and actions longterm.

Notable Quote: “Be more intentional about who you want to become. Have vision beyond your current circumstances. Imagine your best future self, and start acting like that person today.”

Change is hard, behavior change especially. Many folks try and fail to change their habits, in part because they do not fully understand the science behind these behavioral patterns. Books on habit can help readers get to the root of past failures, develop self-discipline, and learn strategies to resist temptation and introduce healthier habits into their everyday lives.

For more advice, check out this list of organizational behavior books.

Here are answers to common questions about books on habits.

What are habit books?

Habit books are nonfiction works that teach readers how to build healthier and more productive routines. These books often explore the psychology and neuroscience behind ingrained tendencies and lay out strategies and steps for behavior change.

What are the best habit books?

The best habit books include Atomic Habits by James Clear, The Power of Habit by Charles Duhigg, and The 7 Habits of Highly Effective People by Stephen R Covey.