You found our guide to Jeopardy game online options.

Jeopardy is a quiz game that challenges players to answer trivia in specific categories. There are several ways to play group Jeopardy online, such as through apps, websites, and Zoom. Online jeopardy is also known as virtual Jeopardy.

This game is the most popular virtual game show. For rules and instructions, check out our guide to team building Jeopardy. 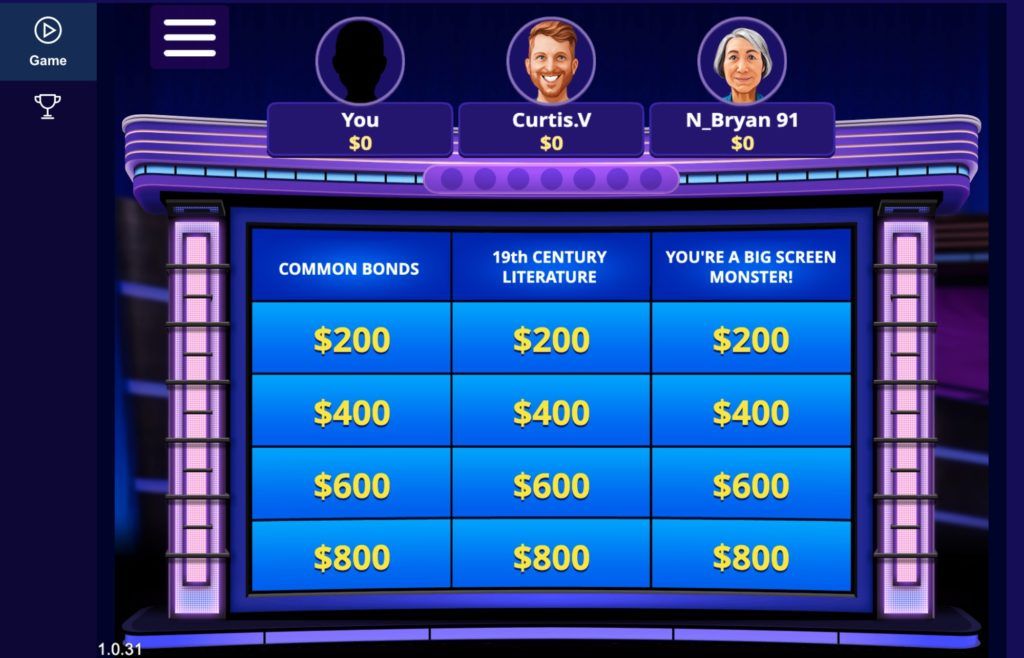 There are several websites where you can play a free Jeopardy game online. One of the best options is Arkadium. First, navigate to the site. Then, share your screen and start the game. The site generates random computer competitors, however you and your team can respond to questions together by shouting out answers or typing them into the chat.

Pro tip: Turn off your ad blocker before visiting the site, or pull up an incognito browser. 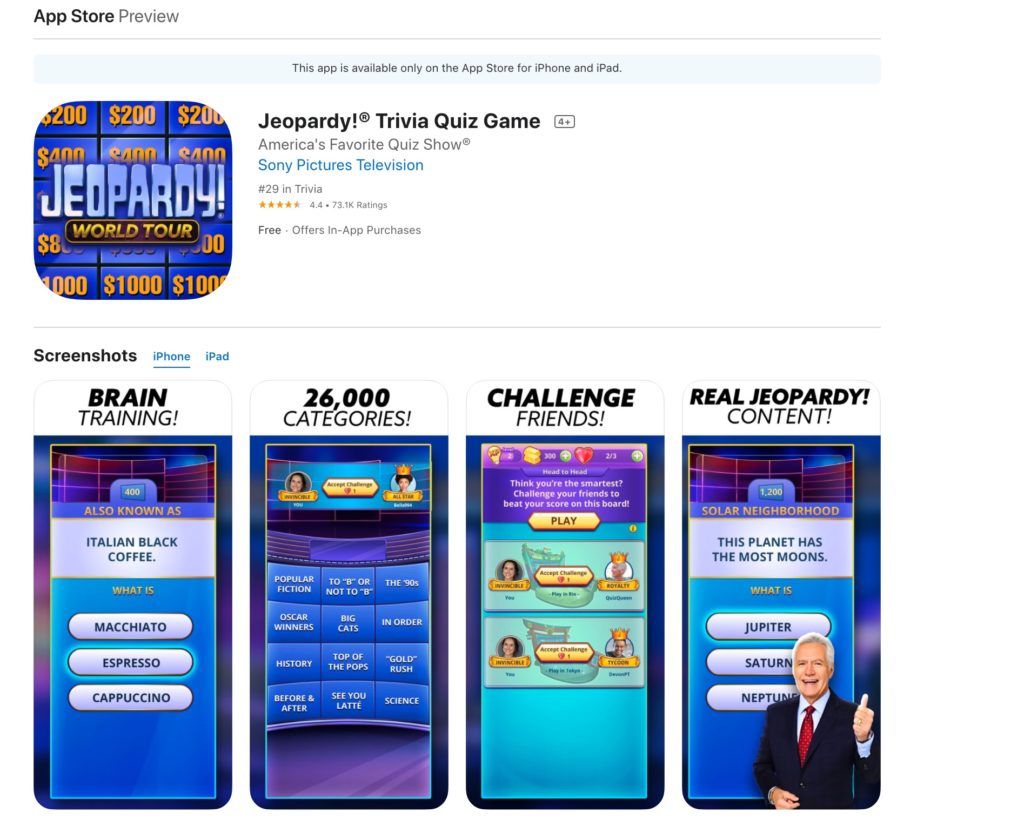 You can also use Jeopardy Apps to play with friends or coworkers. To set up a game night, decide on a date and time and instruct participants to download the app beforehand. Then, pull up the application and launch a game together.

We recommend playing during a Zoom call for face-to-face interaction, or holding a group conversation via chat or text while you play the game. 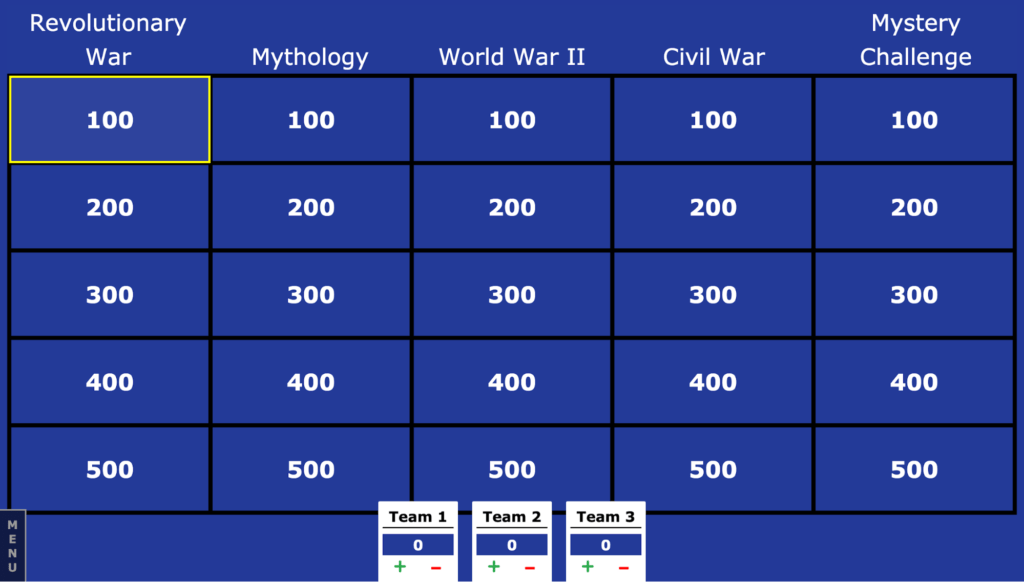 The easiest way to play the game remotely is to use a Jeopardy slideshow template. Simply download the file from Jeopardy Labs, input your questions and answers, pull up presentation mode, and then share your screen. The file is easy to update and navigate in real time, meaning seamless gameplay throughout the call.

For final Jeopardy, you can send teams to breakout rooms and collect written answers via a form or private message.

Pro tip: In case you are short on time, Jeopardy Labs hosts a library of pre-made games you can download and use. 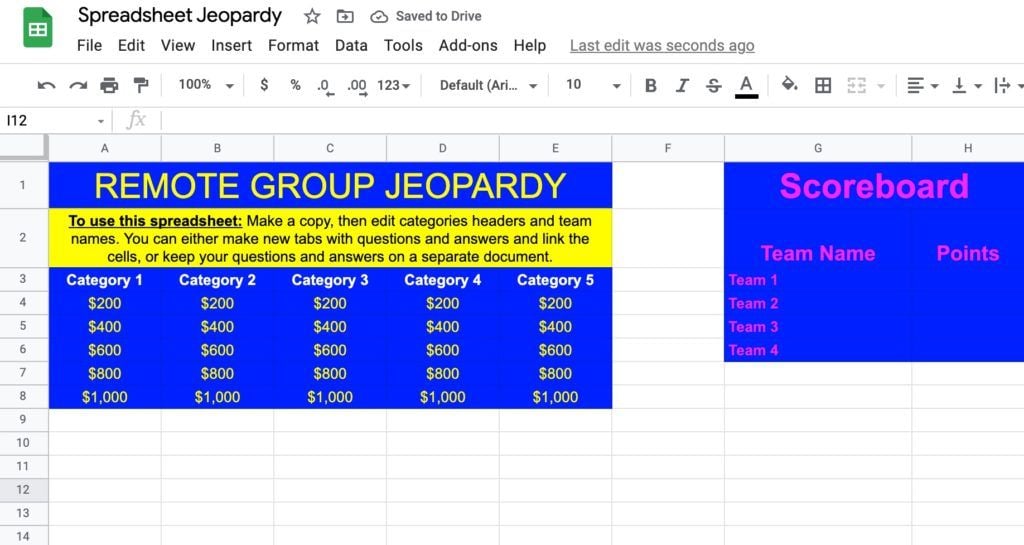 Click on the image above to make a copy of this spreadsheet.

Spreadsheets make great Jeopardy game boards. We recommend using Google Sheets so that you can directly invite players to the document. However, you can also use PowerPoint or a similar program and share your screen.

To ready the game, make a 6×6 table within the first tab. To save time, copy and paste the point values. As players select questions, delete the point values from the cells. So that you do not have to start a new game from scratch, you can create a master copy of the board in a different tab and make a copy to start a new game. Then, reuse the same game board and enter new category headers.

For a more elaborate game, link each cell to a separate tab with the appropriate questions. Otherwise, have the host read out each question as players choose the category. 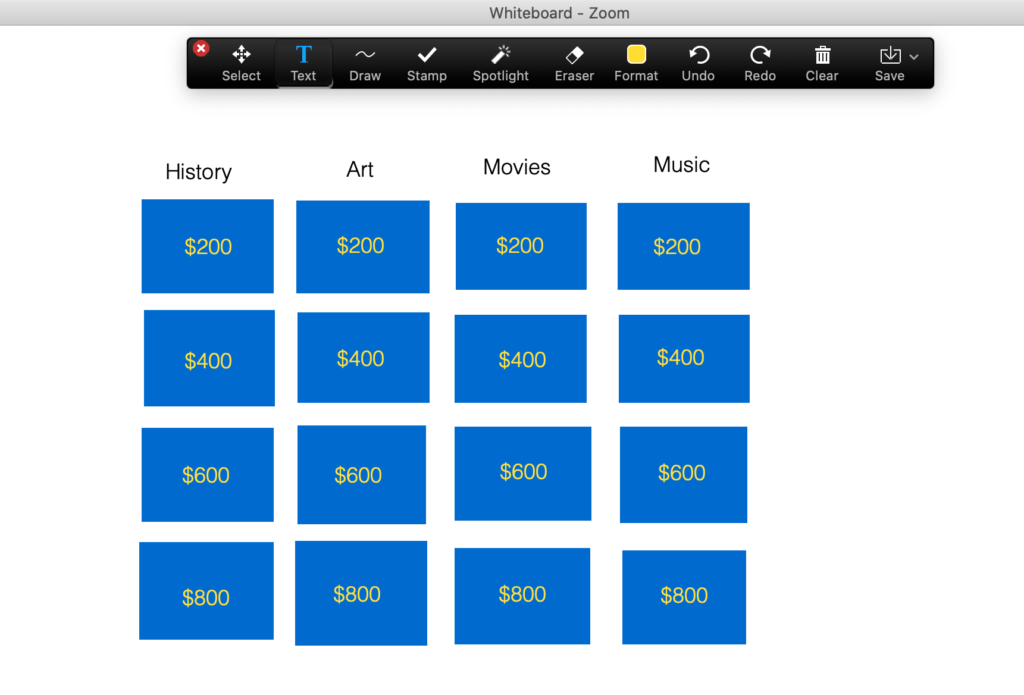 You can also create a Jeopardy game board by using a digital whiteboard. The easiest way to make the board is to copy and paste image tiles or use a template. However, you can also use the draw and text functions to build a board. Players can answer in the chat, or can drop a stamp on the whiteboard to “buzz in.”

Remember that all answers must be in question form.

Then, delete each square once the question is complete. Keep in mind that you can also add multiple pages on the digital whiteboard.

Pro tip: Play a Jeopardy/Pictionary hybrid where players or teams must draw the answer instead of typing or speaking. 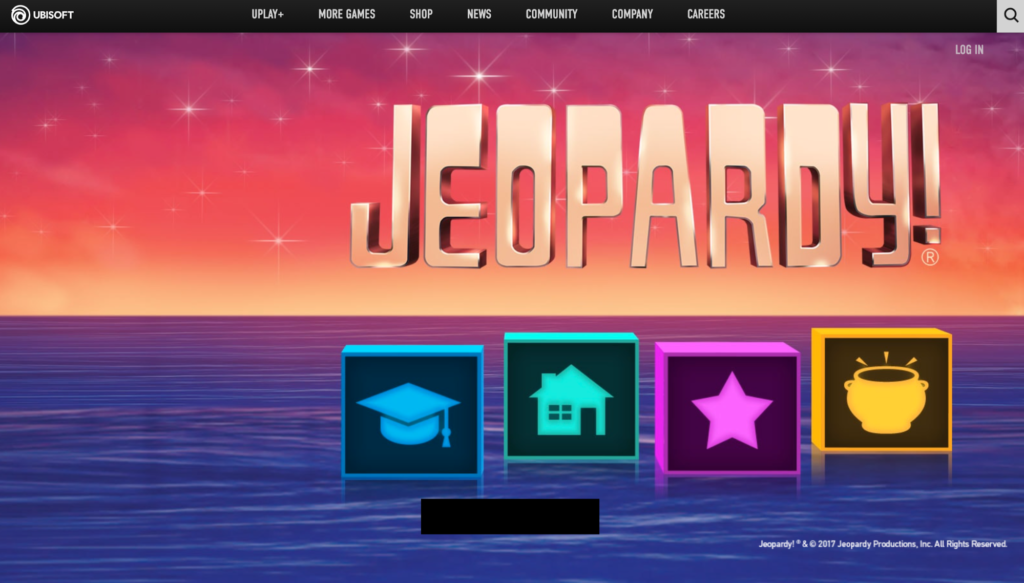 Video games are one of the most straightforward ways to play online Jeopardy. At least one player will have to download or purchase the game and share the screen while playing. Or, the team can play a multiplayer game and join a team room. Organizers will have to purchase and install the game beforehand, however this method cuts down on the prep work of writing questions and building a board. Plus, the software keeps score automatically.

One of the most popular and user-friendly online multiplayer Jeopardy games is made by Ubisoft. 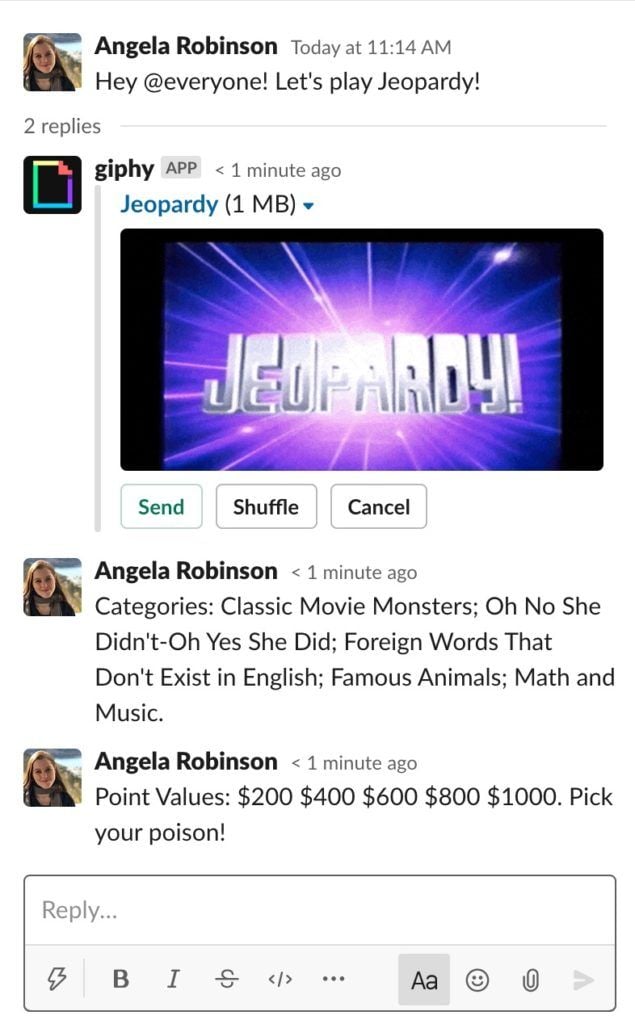 While there is no official Jeopardy Slack app, you can install open source game bots. Or, you can use a Slack extension like Trivia or QuickQuiz to facilitate the game. A third option is to play manually in a Slack channel by posting progressive pictures of the game board and prompting participants to answer by replying to the thread.

Playing Jeopardy in Slack is a good option for teams with conflicting schedules. You can spread the game out over the course of a work week and ask questions at different hours of the day so that all teammates have an equal chance to join in the fun.

Check out more games to play on Slack. 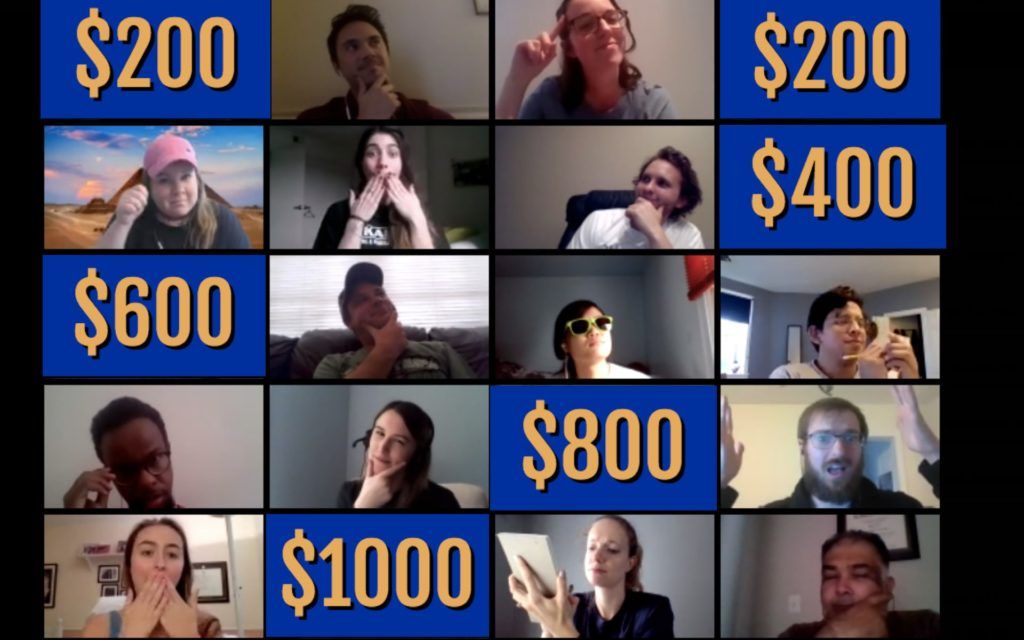 This version of the game requires coordination and cooperation and is more interactive and hands-on than other online Jeopardy games. This activity resembles a mix of Hollywood Squares and Jeopardy. For this exercise, each meeting participant will become a square on the gameboard.

One player can act as the host to moderate the game and keep score.

This version of the game sparks participants’ creativity and saves organizers the work of writing or researching questions.

Pro-tip: Switch to gallery mode so that you can see all question options at once. You can also adjust display settings so that you can view up to 50 screens on one page.

Hands down, the most common way to play Jeopardy is to watch the show and scream out answers (especially if you happen to be my grandmother.) You can recreate this situation with your team by streaming the game show online.

Simply pull up clips of the show on YouTube and share your screen, or stream episodes on Netflix and use a program like Watch2Gether to sync video. You can pause the video before contestants reply to give the group a chance to answer. Then, unpause the video and reveal the correct response.

Either have players keep track of their own points or create, update, and display a group scoreboard by using Canva or PowerPoint.

By the way, if your team enjoys streaming together, here are some team building movies you can watch during your next online outing.

You and your teammates can take the official Jeopardy contestant test online to see which of your coworkers could make it onto the game show. The test only takes 15 minutes, and makes a great meeting icebreaker or activity for a midday break. Either take the test together during a Zoom call, or complete individually and compare scores and times.

Thinking up categories can be just as tough as coming up with questions. Here are some examples of fun Online Jeopardy categories.

There are many other topics to use to source questions. You can even tailor the categories to fit players’ interests and expertise or ask participants for suggestions. If playing in a work setting, then you can also use subjects specific to your industry or company.

Coming up with questions is the most time consuming part of setting up an online Jeopardy game. Here are some starter questions to speed up the setup process.

Q2. Which US State is closest to Africa?

Q3. When this web service launched in the mid-1990s, it offered medical transcription services as well as web-building tools.

Q4. In 1940, this actress was the first African American to win an Oscar.

Q5. This is the boiling point of water at the top of Mt. Everest

Q6. This was the first item sold on eBay.

Q8. This figure was the third woman to become pharaoh, and the first to achieve the full power of the position.

Q9. This highway located in Brazil is the widest road in the world.

Q10. The fingerprints of this animal are nearly identical to those of humans.

Q11. During this year, Pluto was downgraded to the status of “dwarf planet.”

Q12. This horror movie heroine was the mother of Jamie Lee Curtis.

Q13. This state had the honor of being the first US State quarter design released.

Q14. Mary Anne Evans is the real name of this influential English author.

Q16. This war, which lasted 38 minutes, is generally considered to be the shortest war in history.

Q17. A labor is the name for a group of this type of animal.

Q18. Loxodonta is the scientific name for this animal.

Q19. Sb is the abbreviation for this periodic table element.

Q21. This famous Olympian earned the nickname “The Buckeye Bullet” in college.

Q22. The Beatles caused controversy when John Lennon claimed in a 1966 interview, “we’re bigger than…” this figure.

Q23. This buccaneer who operated in the South China Sea during the Qing dynasty is often called the most successful pirate in history.

Q24. This famous female artist once dreamed of becoming a doctor, and picked up painting in earnest after being severely injured in a bus accident.

Q25. This Greek mathematician is often referred to as the “father of Geometry.”

For similar quiz games and questions, check out our guide to online trivia.

There are many options for playing Jeopardy online, and the best way to play depends on the group, time, and available resources. If you are unsure of which method is most suitable for your friends, then you can try out several approaches and stick with the game format that works best. Since you can swap out the categories, you can play the game as a recurring virtual game night or team building event. The game show evokes a sense of nostalgia for many people and provides an outlet for friendly competition for individuals and teams.

Next, check out this list of virtual game night ideas, and this collection of remote family games.

Here are answers to common questions about online Jeopardy.

What is online Jeopardy?

Online Jeopardy is a multiplayer digital version of the classic game show. Playing the game on Zoom involves using a template or app and screen sharing. Virtual Jeopardy is a fun and familiar quiz show format that engages groups and gameifies learning.

What are options for playing Jeopardy online?

How do you play virtual Jeopardy?

Next, join a video call and split participants into teams. Share your screen so that all participants can see the questions and gameboard. Keep score throughout the rounds, using a piece of scrap paper or a separate file. For final Jeopardy, you can send teams into virtual breakout rooms to discuss the answers. At the end of the game, the team or individual with the highest point value wins.

What are some good online Jeopardy ideas?

Good ideas for online Jeopardy include customizing the categories to suit the audience or occasion, playing remote Jeopardy tournaments, and using the famous game show music. You can also send winners prizes like digital gift cards or online subscriptions.