Zoom drinking games are virtual games that involve sipping a drink when prompted by the rules. Examples include Never Have I Ever, Zoom Flip Cup, and Drunk Pirate. While these games typically include alcoholic beverages, you could play with nonalcoholic drinks or use physical challenges instead. The goal of online drinking games is relaxation and socialization.

These games are a subset of games to play on Zoom, and are perfect for virtual happy hours and virtual game nights.

From word games to card games to flip cup, here are the most entertaining drinking games to play on Zoom.

Bingo is fun to play online with coworkers. You can easily turn the activity into a drinking game by taking a sip every time you mark off a square.

We made a template for you. 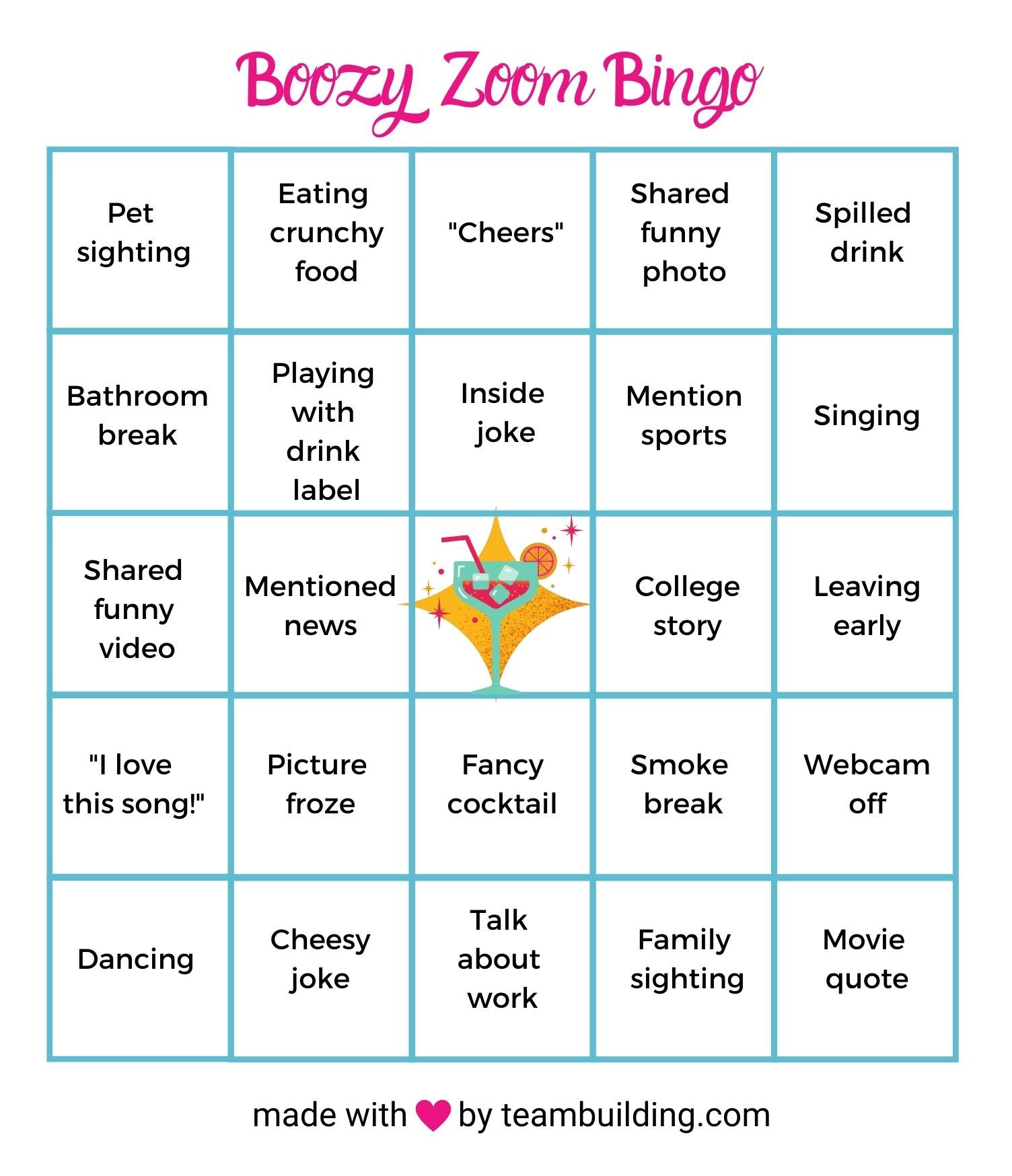 The first player to mark five squares in a row and shout out Bingo wins!

For a similar game, check out Online Team Building Bingo. 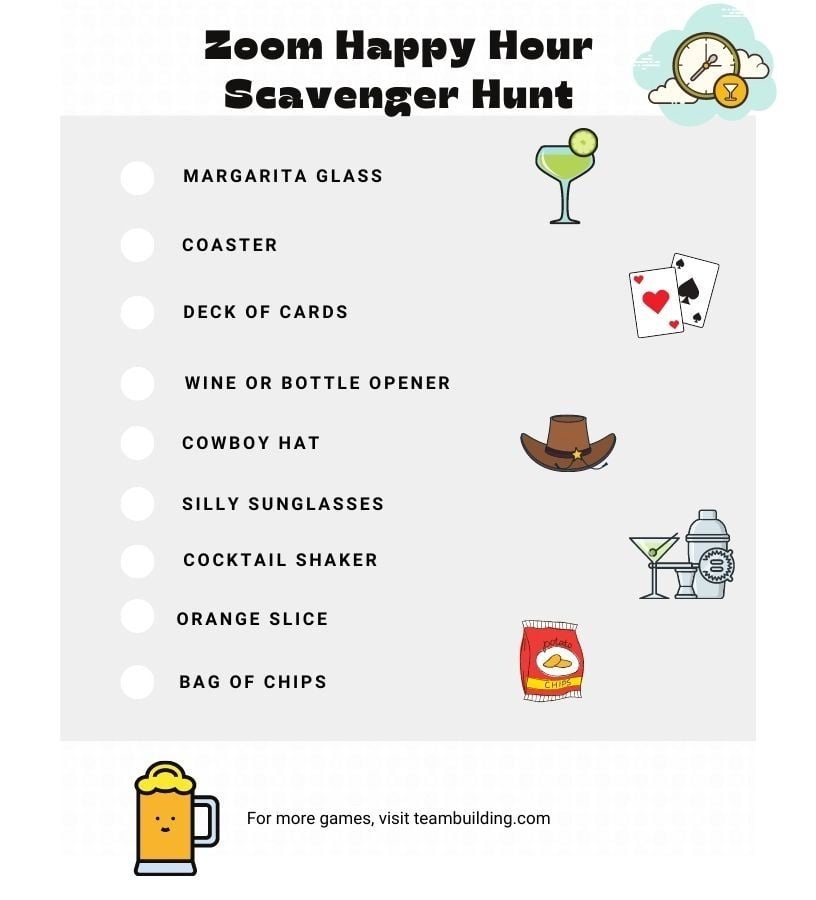 Scavenger Hunts make for the best interactive online drinking games. To play, ask players to fetch items one by one. Participants who do not own the items must drink. The first player back to the computer can pick another player to drink. The last player to return drinks automatically.

We made a template to use for your game.

Blackout Truth or Dare is a classic game with a modern spin. Players follow regular Truth or Dare rules, except that players turn web cameras off if not willing to answer the question or complete the dare. The host then picks a player to complete the challenge. All players who opt for black screens must drink. Hosts can choose drinking-related questions or dares too.

Here is a tool to generate random truth or dare prompts for your game:

Drunk Pirate is one of the most popular virtual drinking games. Simply visit the website, agree to the terms, and start playing. The site shows flash cards with instructions such as “the best dressed player must drink,” or “you and the player on your right name your favorite movies. The group picks the worst film. Loser drinks.”

You can play as many rounds as you like, and feel free to skip work-inappropriate prompts. Best of all, the game is free!

Flip cup is a drinking relay race. One by one, players down a drink and overturn the cup.

The cup must be in full view of the screen at all times.

To make the game easier to follow, ask teams to use different color cups or to mark cups with a symbol.

One of the best parts of Zoom meetings is catching a glimpse of participants’ pets. Safari has one simple rule– when you see an animal on screen, take a drink.

As the game goes on, you can add extra rules. For instance, when you spot a shy pet, take two sips, and when a cat knocks over a cup down your drink.

Ride the Bus is a card-based drinking game where each round follows a different rule. The dealer flips over cards one at a time, asking players to predict the kind of card. If wrong, the player must drink, and if right, the player picks someone to drink. Each round, the player keeps their card, as the next question usually involves previous cards.

Round 1: Red or black?
Round 2: Higher or lower?
Round 3: Inside or outside? As in, will the value of this card fall between the two numbers of the first two cards, or no?
Round 4: Guess the suit

In the last round, if the player guesses the suit correctly, they can give out five drinks. If not, the player must take one drink.

To play Ride the Bus on Zoom, use an online deck of cards and share the screen.

Synonyms is a fast-paced virtual drinking game. One player says a word, and the next players list synonyms. The game moves in clockwise order, and each round ends when a player hesitates or repeats a word. After taking a sip, that player then shares a totally new word.

Like Synonyms, Rhymes requires players to take turns adding words. Instead of listing synonyms, participants name words that rhyme with the starter word.

To make the game harder, ask players to create whole rhyming lines of poetry instead of simply adding one word.

Pet Peeves is a Zoom drinking game for large groups. To play, assign each participant a pet peeve. Then, send attendees to breakout rooms. Players announce to the room, “my pet peeve is…” The other players confess whether or not the phrase applies, and if so, player one must drink.

For example, if “my pet peeve is people who play the banjo,” and another player raises a hand, then player one takes a sip. The game breaks the ice and helps guests get to know each other. Players understand the “pet peeves” are not real.

Depending on the size of the group, give players five minutes or so in each breakout room. Then call participants back to the main room and send them to new breakout rooms.

Never Have I Ever is one of the easiest long distance drinking games. First, participants hold up ten fingers. Players take turns sharing “Never Have I Ever” statements. Any player who has performed the act must lower one finger and take a sip.

To play as a drinking game, the team with the least answers drinks. Another fun rule is that the player with the best justification can choose someone to drink.

Check out our full list of Would You Rather questions.

This or That is one of the simplest Zoom meeting drinking games. Players ask each other to choose between two opposites, sharing answers aloud, in the chat, or changing display names to the response. The team with fewer votes each round must drink.

This or That communicates player preferences and quickly establishes common ground.

Explore more This or That questions.

Here are some starter trivia questions:
1. Q: Which US state quarter features a diamond?
A: Arkansas
2. Q: Peter Gene Hernandez is the real name of which popular singer?
A: Bruno Mars
3. Q: What is the official national dish of England?
A: Chicken Tikka Masala
4. Q: What was the original name of the drink Bloody Mary?
A: Bucket of Blood or Red Snapper
5. Q: Which is the only planet to spin clockwise?
A: Venus

For more tips, check out our guide to virtual happy hour trivia.

Whether playing with friends, family, or coworkers, online drinking challenges are a great way to unwind and spend quality time together. Rules are simple, so players catch on quickly. Plus, drinking games are social games and foster human connection, even if only on a Zoom screen.

For more fun tips, check out our lists of Zoom meeting ideas, virtual games for large groups and online minute to win it games.

We also have a list of Zoom game apps.

Here are answers to common questions about playing drinking games on Zoom.

What are Zoom drinking games?

Zoom drinking games are online icebreakers that involve the consumption of alcohol. Players must sip a drink when prompted by the rules or other players. Participants play these games during video calls. Most players use wine, beer, or spirits, and you could play with nonalcoholic beverages as well.

What are some good Zoom drinking games?

Some good drinking games for Zoom are This or That, Safari, Ride the Bus, and virtual scavenger hunts.

How do you play Zoom drinking games?

The mechanics of Zoom drinking games are similar to real life drinking games. Instead of gathering in a real room, participants meet in Zoom rooms. To play drinking games on Zoom, explain the rules, ensure everyone turns on their cameras and microphones, and have fun! Posting the rules in the chat or sharing a graphic is a good idea, and so is using Zoom features like breakout rooms to make the game interactive.

To be a little obvious, teambuilding.com is a team building company.

And a darn good one... we hire brilliant people, provide extensive training, and develop one of a kind experiences.

In 2021, we are running virtual events for teams all over the world.

And when there isn't a global pandemic, we do local activities too.